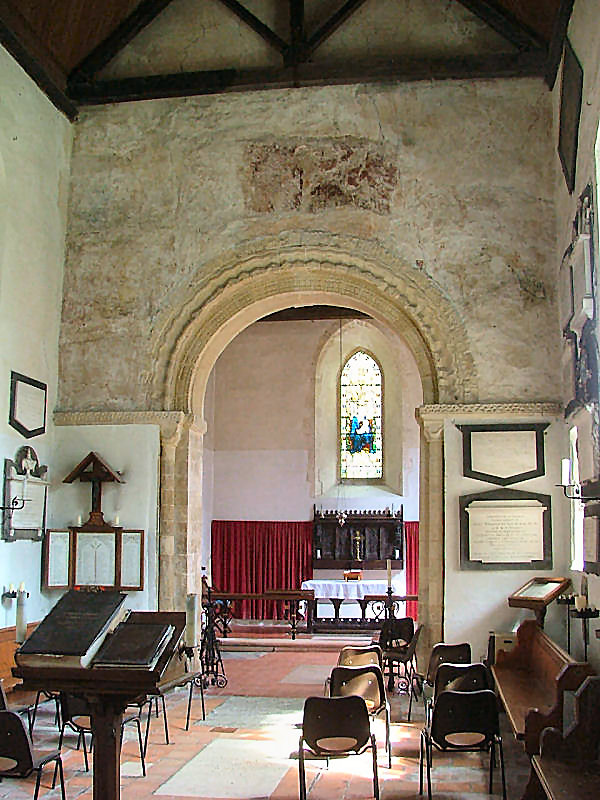 What an amazing and little known gem! Hiding beneath the ruins of the Norman manor house, the church of the Blessed Mary of Walmer is a complete Norman structure, returned to its original shape after two campaigns of enlargement. As befits a military town the church, now used once a week on a Thursday, contains memorials to army and navy officers - the most important being the hatchment of The Duke of Wellington. He was Lord Warden of the Cinque Ports and a frequent worshipper in the church. When he died at Walmer Castle a hatchment was carried in front of the cortege to the station and it now hangs in the church. The high chancel arch is Norman, whilst above it are remnants of medieval painting and an eighteenth century cartouche. In the chancel is a lovely scrolly tablet to William Lisle, a bodyguard to Charles I. The font cover dates from 1664, no doubt marking a replacement after the Puritans destroyed the original. In the 19th century the church was enlarged and the interior altered to face south. After nearly a hundred years this extension was demolished taking the building back to its original form. The rather startling stained glass, in the manner of Hugh Easton (see also Crayford) is 20th century and depicts St Raphael and St Elizabeth of Hungary. More conventional windows of St Nicholas and Our Lady and Child help to address the balance. The huge churchyard contains one of the oldest yews in Kent - certificated at 1400 years old!