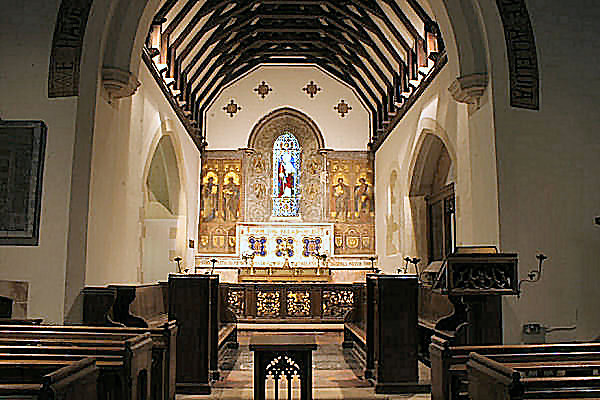 The church stands within the grounds of Waldershare Park and is not easy to find. Through a lychgate, in a tree-shaded churchyard, the three eastern gables may be seen. The centre one is of natural flint, whereas the outer two are of brickwork, and these sum up the charm of this church - one of contrasts. The nave was almost rebuilt in the nineteenth century and you could almost imagine it belonging to a suburban church of the 1870s. The roof is high, the walls are bare and the character rather austere. The chancel, too, has a Victorian feel with a heavy marble reredos and stencilled walls. Leading off to north and south of the chancel are the brick chapels which we noted on the outside. The south chapel is the earlier, dating from 1697, and contains the tomb chest of Susan Bertie. The same tomb also commemorates Montague, Earl of Lindsey, who was loyal to Charles I, and is noted as 'having attended his sacred Majestic to his grave and giving him a Christian burial at Windsor after his barbarous and horrid murder'. The north chapel was built in 1712 to accommodate the monument to Sir Henry Furness who built the present mansion house in the park. This monument only just fits into its chapel and rises in stages like a wedding cake, with four life-sized broken-hearted ladies at the base for starters. As a conversation piece it is unrivalled in a country church. The church is no longer used and is in the care of The Churches Conservation Trust.