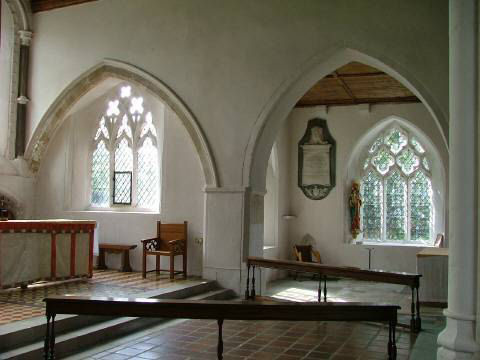 A lovely church, full of atmosphere. There is much plain glass which makes a light and impressive interior. In the south aisle there are a surprising number of medieval wall paintings, especially fine being those of St Michael and The Crucifixion. In the sanctuary, on the north wall, is a superb drawing - which was never painted - showing five priests. The south chapel has a good set of decorated windows with reticulated tracery. There are several image brackets. The north chapel contains some excellent monuments, including three plain tomb chests, one of which commemorates William Maydeston (d. 1419). The arch from the north chapel to the nave has on its underside some thirteenth-century chevron painting and an entrance to the rood loft stairway. In the chancel are some good stalls with five misericords, showing two dragons and a lion-like creature.