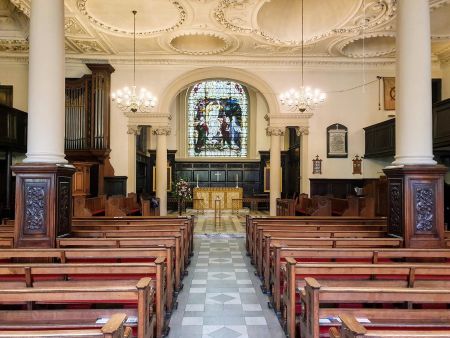 The red brick church stands on a busy junction at the end of the Pantiles whose patrons it was built to serve in 1678. Within thirty years it had been extended on two occasions to more or less reach its present size. The ceiling bears the date 1678 and is rather domestic in character, based on deep circular domes with putti, palms and swags. The stained glass in the east window is based on a picture by Alex Ender and was designed by Heaton, Butler and Bayne in 1901. There is an excellent window under the north gallery designed by Lawrence Lee in 1969. The church was sympathetically restored by Ewan Christian in 1882, when the shallow chancel was added. The woodwork it contains was brought from one of Wren's City of London churches. Outside the west wall of the church, set into the footpath, is a boundary marker to show the former parish boundaries of Tonbridge and Speldhurst.