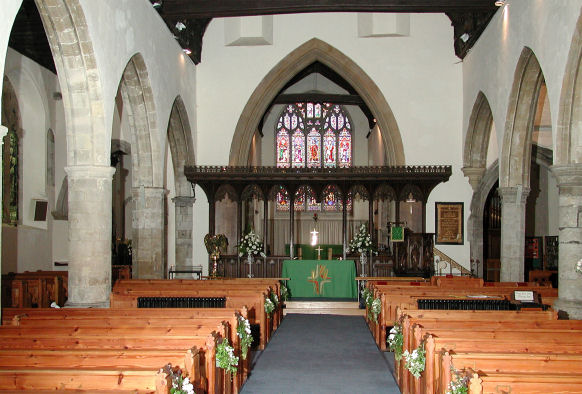 A superb church, which despite a heavy-handed restoration by G.M. Hills (see also Newenden) in 1864 still has much of interest. The nave ceiling is exceptional fifteenth-century work, rather more domestic in feel than is normal in an ecclesiastical building. There are two blocked thirteenth-century windows above the chancel arch - an unusual position to find windows in Kent. The five bay aisles are extremely narrow. The glass in the south aisle windows by Hughes of 1865 are rather fun. In the north chapel is a fine alabaster standing monument to Herbert Whitfield (d. 1622) and his wife. This monument cuts off the base of the north-east window and displays many colourful coats of arms. The chancel screen and pulpit are late nineteenth century and fit in with the medieval architecture better than most works of that period.