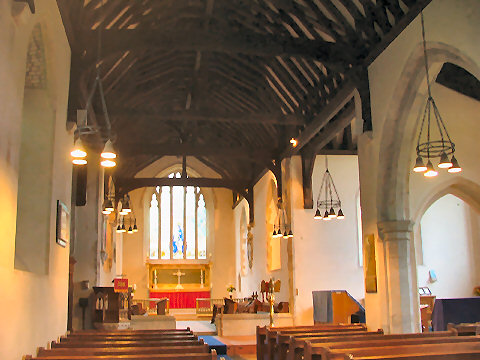 A long and light church, best viewed from the south. Like nearby Ickham it is cruciform in plan, with a west rather than central, tower. Sometimes this is the result of a later tower being added, but here it is an early feature indeed, at least the same age (if not earlier) than the body of the church. Lord Kitchener lived in the parish, so his name appears on the War Memorial. At the west end of the south aisle, tucked out of the way, is the memorial to Sir Basil Dixwell (d 1750). There are two twentieth century windows by Martin Travers. The 1925 east window shows Our Lady and Child beneath the typical Travers Baroque Canopy. Under the tower, affixed to the wall, are some Flemish tiles, purchased under the will of John Digge who died in 1375. His memorial brass survives in the Vestry.