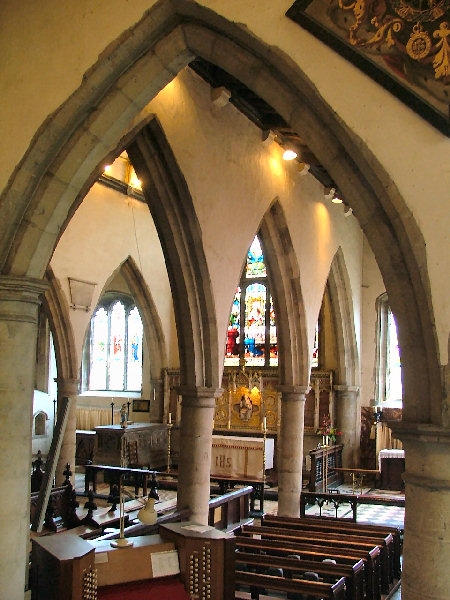 A stately church in a good position set away from the hustle and bustle of this cosmopolitan town. The very narrow tower of 1475 is not visually satisfactory when viewed from a distance but its odd proportions are hardly noticed when standing at its base. The church is very much the product of the families who have been associated with it over the centuries and who are commemorated by monuments within. They include the Fogges and the Smythes. The former is supposed to have wanted to create a college of priests here, but by the late fifteenth century such foundations were going out of fashion and the remodelling of the church undertaken by Sir John Fogge may have just been a philanthropic cause. Unusually, when the church was restored in 1860 the architect Ewan Christian kept the galleries (he usually swept them away), but Christ Church had yet to be built and the population of this growing town would have needed all the accommodation it could get. Even in 1851 1000 people had attended the church in a single sitting. The pulpit, designed by Pearson, was made in 1897.